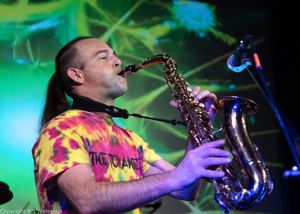 Sacha has always had music in his life from a young age.  After years of playing the piano by ear in his childhood, he started the saxophone when he was 11.  At 15 he had the privilege of playing at the Lionel Hampton Jazz Festival in Moscow, Idaho and at the age of 16 the Clackamas Jazz Festival in Clackamas, Oregon. These years helped sculpt Sacha's abilities with the steady hand of his gifted band teacher Gene "Sarge" Huber of Wenatchee High School. “Sarge” made sure we had the experience to play with seasoned musicians such as Don Lanphere, Jon Pugh, and many other accomplished artists. Doing concerts with students, workshops, competitions, and gigs during this period was the most rewarding time of Sacha's life. After many years developing his skills playing in concert bands, orchestras, jazz bands, rock bands, and quartets; he went on to record with fellow musicians in many different genres.

When Sacha was 18 he performed saxophone, keyboards, and backup vocals with Rockin’ Robin Ellis.  From 1993-99 they recorded music and performed in bars, venues, and festivals mostly in the states of Washington and Nevada.  This gave Sacha a deep understanding of what music scene was all about.  At the age of 23 he was then playing in 3 different projects from the towns of Oroville, Omak, and Republic WA which again featured him on the alto and tenor saxophones, backup vocals, and keyboards.  Sacha’s contribution brought flavours to the groups many would come to hear.

In 2008 he moved to Vancouver Island, British Columbia with a desire to return to his home country of Canada where his father lived.  Sacha began to meet many artists around the area and soon co-created The Chemainus Rhythm & Blues Cabaret, performing once a month for 3 years.  During this time Sacha primarily played saxophone in the core group for the open stage type format. Sacha met members of Luv Train and Mexican Bus Ride which led to more saxophone work for their live and studio projects alike.  In 2012 Sacha briefly attended the Vancouver Island University Jazz Program before relocating to Grand Forks, BC where he would reconnect with his friend he met in 1995.  Since 2013 he’s played in different groups such as “The Grand Forks Community Band”, “The Big Raven Band”, “Unity”, “The Tokanees”, and of course “Modern Bob” to name a few.

Now in 2020 Sacha is primarily focused on projects with “Modern Bob” and “The Tokanees” as his full-time projects. The energy he gets from playing saxophone, some keys, backup vocals, and bass is finally allowing him to see some huge movement in these future projects. The hope of many recordings coming out of the studio or live performances to capture the energy we all participate in is something Sacha is looking forward for years to come.